Tolmin is a town on a juncture of Soča, Bača and Idrijca valley. Towns charm is a confluence of two beautiful rivers, Soča and Tolminka, which is a wonderful spot in the intactness of Tolmin nature.

During the Grand Soča Front, Tolmin was in the centre of the battlefield. There are still lots of remains that remind us of mentioned battles. One of the most importnat relics is Javorca, memorial Church of the Holy Spirit, which is located above the mountain pasture Polog. Memories on those atrocities recalls also German Ossuary, the biggest ossuary of german soldiers, fallen in the battle fought in Soča Valley.

Another historical importance is Kozlov rob with many remains of Tolmin Castle. In the middle age, this castle was the most important in Tolmin region. Ruins, which played an important part also during the war, today represent an cultural importance and also a view pont on Tolmin basin and its sourrounding mountains.

Tolmin is also known for its water treasures. The river Tolminka shows beauty with her source on Polog mountain pastures above the town. Flowing down the valley, river Zadlaščica merges with its stream and they together form a magnificent gorge, Tolmin Gorge, which is also an enterance to the Triglav national Park.

The Cave of Zadlaška jama or Dantes cave, also a part of the gorges, is a natural sight with historical hint. The cave, through which the water of Soča glacier flowed, is reachable by passing the famous Devils bridge.

Not to forget Tolmin culinary culture, you will not regret trying local frika dish – speciality, which may vary in some ingredients from village to village.

How to reach? Show directions 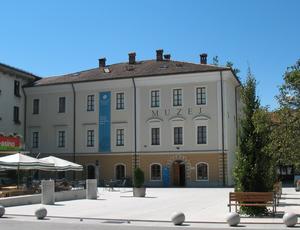 The Tolmin Museum is placed in Tolmin city center in the former Coronini Mansion. There you can see a permanent exhibition The Soča region and its historical...

German ossuary is placed in the vicinity of the confluence of rivers Soča and Tolminka, since year 1938. Fallen german soldiers, that were slain during the...

Remains of the Tolmin castle from the middle age are seatled on a hill above the town, named Kozlov Rob. Besides sightseeing, the hill offers beautiful view on... 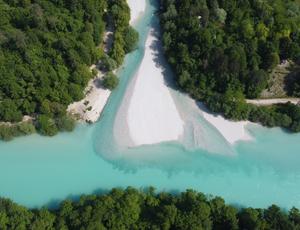 The confluence of two mountain rivers Soča and Tolminka is a place, which is definitely worth visiting. In the summer time this location is very popular among...

See all sights
Want to be part of soca-river.com?
Call us on the phone number 068 944 855 or write to us at info@soca-river.com