To visit Kobarid we can take two main paths, from Tolmin or Bovec. On both paths we are accompainied by river Soča andour views are taken with the beauty of mountains and hills.

Kobarid is a small, nucleated city which offers many tourists activities. In the past, however, it was strongly marked by both First and Second World Wars. The most resounding event in this erea from The World War One, is The Miracle of Kobarid, the ending of Soška fronta.

In addition to many things that remind us of henious events that Soška fronta brought, there is an italian ossuary, which surrounds the church of Saint Anthony.

Kobarid has many natural sights, is a beautiful piece of nature which attracts visitors. One of the most known natural sight is the Kozjak waterfall, which is, with its 15 meters of hight, a real natural pearl and is the highest waterfall that flows into the river Soča.

In addition to the Kozjak waterfall and the river Soča, it is also worth mentioning the mighty mountain Krn with his 2245 meters above the sea level, offers a beautiful view of the valley and mountains.

Kobarid ha salso other sights, such as: the Kobarid museum from times of war at the Valleys of Soča, Napoleon's bridge over the Soča river, the castle of Tonoc where the archeological proof of stone age inhabitat was found, historical – ethnological collection from Planina to Planika which shows theproduction of the dairy products from begging of the processto the final product, both in history and in todays world.

Near Kobarid flows river Nadiža which is considered to have healing effects. Over the river there is another Napoleon's bridge.

A few kilometers away from Kobarid, there is the most western point of Slovenia – a village named Rodbišče, which has a well-preserved so called black kitchen (Črna kuhinja). Near Rodbišče we can find Berginj museum, with the histroy of these places and below mountain Krn there is a villoage called Vrsno which is the birth place of poet Simon Gregorčič, whose poetry talked about the beauties of nearby mountains and the river Soča.

Kobarid and its surroundings, can boast with good food and cuisine. Restaurants invites to taste manjy traditional dishes which were developed into more modetn ones. One of the most known dishes in Kobarid still remains Kobarid's štrukelj, which, for desert, every Kobarid housewife knows how to prepare.

Kobarid itself is a very rich town, colored by interesting history, accompanied by a rich tourists offers in unspoiled nature, which enchants every visitor.

How to reach? Show directions 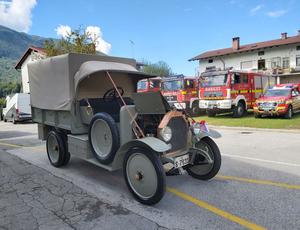 Volunteer fire department of Kobarid is since this year richer for one renewed retro vehicle – »Kadorna«. They now proudly own a FIAT 15-TER, which was in use... 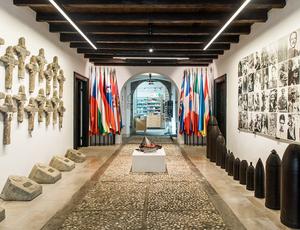 The Kobarid Museum of the 1st World War

The Kobarid Museum of the 1st World War possesses a rich collection that brings us back in time of warfare in that era, especially in the area of the Isonzo... 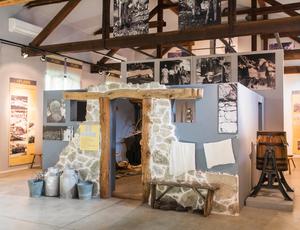 The Posočje is characterized by the millennial tradition and heritage of mountain pasture and cheese-making. The first mention of the mountains is already... 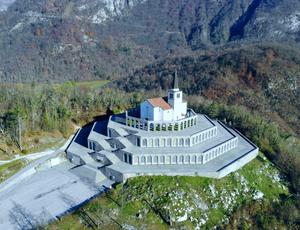 The church of Saint Anthony

The church of Saint Anthony of Padua, which was consecrated in the 17th century, stands on Gradič above Kobarid. Around the church there is also an ossuary...

See all sights
Want to be part of soca-river.com?
Call us on the phone number 068 944 855 or write to us at info@soca-river.com